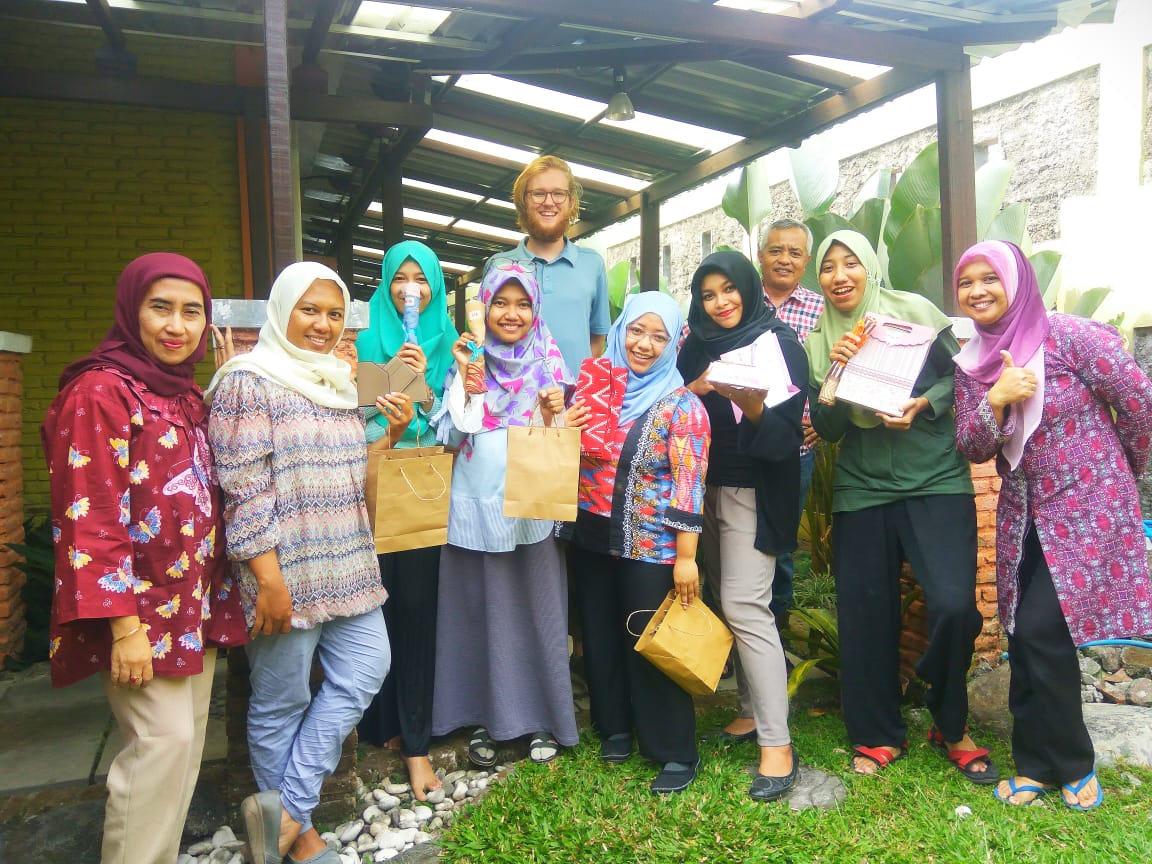 My name is Isaac Wills, and I have been a student intern at Rifka Annisa for the past seven months. While my time at Rifka Annisa is coming to a close, I am excited for the organization’s future—in fact, there’s currently a change in directorship—and I’m hopeful that my experiences at and impressions of Rifka Annisa will be helpful to futures interns.

First, a little more info about myself and my program: I’m a dual citizen of the United States and Canada, although home for me is Nashville, Tennessee. I’m a high school graduate, and I will attend Princeton University in New Jersey this coming fall. My program, run in partnership by Princeton and Where There Be Dragons, is a service-oriented gap year centered around the “learning service” model—that is, the best way to serve a foreign community is to be first and foremost a “learner.” Being a “doer” or, rather, a “helper” indeed comes later, but gaining an understanding of the new context one finds oneself in—culturally, socially, professionally, etc.—is the first imperative.

Thus, it was quite easy for me, a 19-year-old with little working experience (and absolutely none with regards to counseling victims of sexual violence), to embody the role of a “learning servant.” Moreover, my high school was exclusively for boys, so I had little formal exposure to women’s issues prior to my time at Rifka Annisa. And honestly, that’s what made Rifka Annisa so appealing to me in the first place; I was exploring entirely new territory. I’d be lying, though, if I did not mention that was I somewhat daunted early on, especially with my initial lack of Bahasa Indonesia skills (I’m now conversational). But the staff and in particular my mentors Mbak Nina and Mbak Indiah, who are both fluent in English, made my transition a comfortable one. 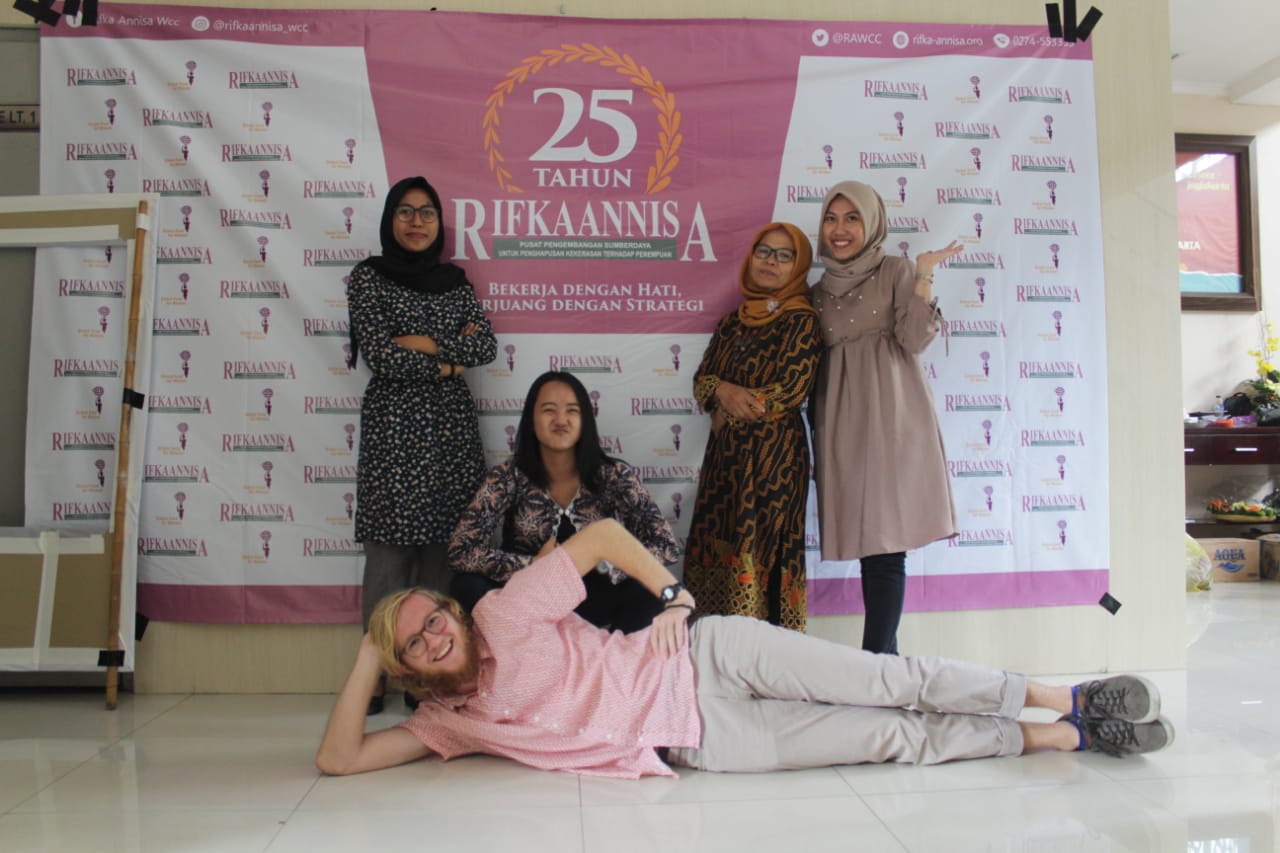 When it came to first impressions, I found that Rifka Annisa had a very laid-back office culture. There is certainly, however, no lack of motivation or commitment on the part of the staff; quite to the contrary, their dedication to their clients and the broader women’s movement inspired a research project of mine later on. But I mention the casual office environment because it was a stark contrast to the strict “professionalism” I was familiar with in the United States. For a point of contact, there exists the Indonesian cultural concept of jam karet, “rubber time,” which in the context of work means flexible hours, meeting times, due dates, etc. Don’t get me wrong, though! A lot of work gets done at Rifka Annisa (and with a lot less stress), but this difference may play into culture shock for foreign-born interns. Additional challenges that I encountered are that many of Rifka Annisa's programs are underfunded and its case filing database, which uses Microsoft Access, is somewhat antiquated.

So, what did I do at Rifka Annisa? In brief, I learned a lot! My first two weeks were spent in each of Rifka Annisa’s divisions (save for finance), and I had conversations with most of the employees. With the Community Outreach and Advocacy Division, I attended and helped document an event for women’s empowerment at the village level. In the Counseling Division, I learned about the case filing process, as well as the counseling methods—both for legal and emotional support purposes—that the staff use to assist their clients. And I talked with Mbak Lutviah about her vision for the Media and Research Division, which was in flux at the time. By the end of orientation I was expected to have a plan for how I would invest my time in one or more of Rifka Annisa’s divisions during the next six and a half months. 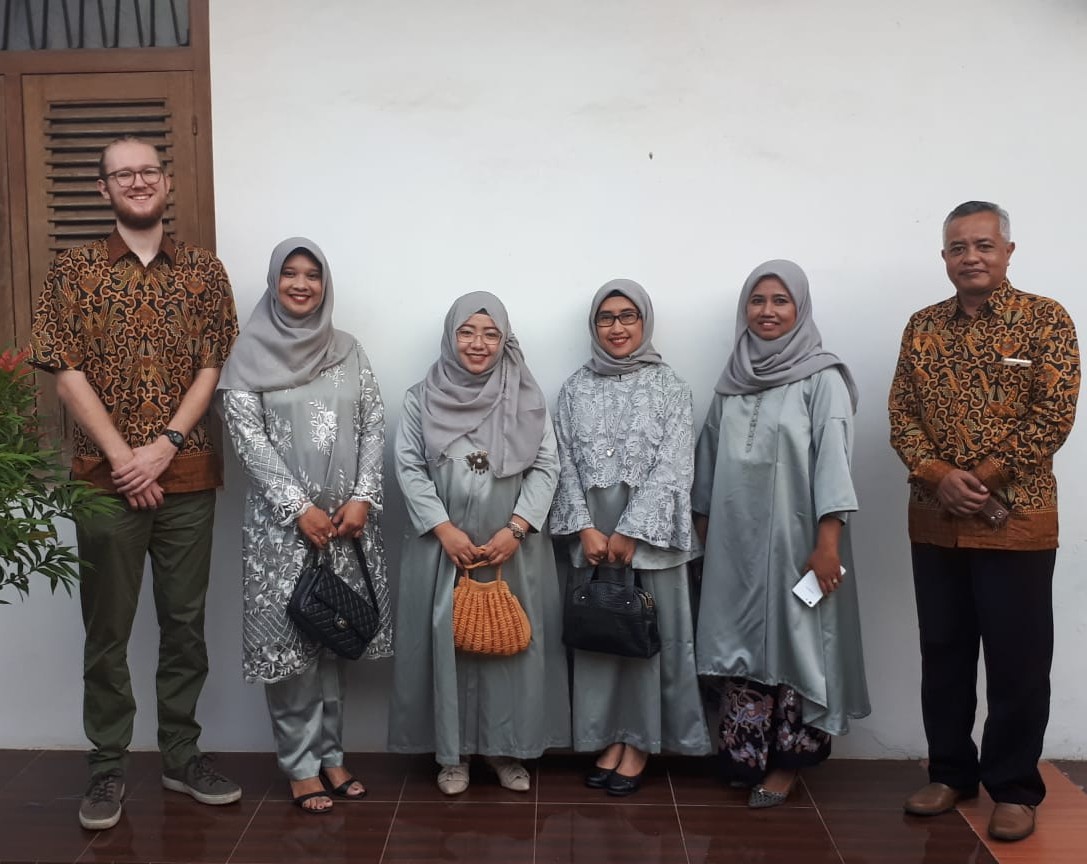 Which leads me to my second impression of Rifka Annisa: they are very excited by people who can create learning opportunities and projects for themselves. In a word, take initiative! While I wasn’t able to help with counseling procedures, I was able to write about the real human experiences, desires, and needs of several Indonesian feminists. As previously mentioned, I was inspired by co-workers like Mbak Lutviah and Mbak Indiah to conduct a four month-long research project on the historical and contemporary circumstances of Indonesia’s women’s movement. Needless to say, my interactions with Indonesians at Rifka Annisa informed much of my research and writing processes. Additional projects/ideas of mine included the following: website editing (English) & maintenance, writing subtitles (English) for videos, event documentation & reportage, and informal English lessons with co-workers.

Everything considered, I am incredibly grateful for my time at Rifka Annisa. By working closely with individuals who are fighting sexual violence and female disenfranchisement and dispossession, I have come to gain a greater appreciation for feminism and feminist efforts worldwide. Not only have I learned about Indonesia’s women’s movement, but I also now see its American counterpart with fresh eyes. A significant part of my experience at Rifka Annisa, too, was about having fun with officemates and building relationships. I will cherish memories of making blueberry pancakes, having conversations about American pop culture, and going to my co-worker's wedding. To everyone at Rifka Annisa, terima kasih telah membuat waktu saya di sini menyenangkan!